My brother just returned from New Zealand and told me that “water is free” in New Zealand. I was baffled – surely, there must be a cost to using water, even if it is in abundance. I did some research and true enough, there is a metered cost for water use in NZ , which is very similar to the cost of water in Singapore – if you have a meter; He was working in a rural area that possibly tapped groundwater for use.

Yet, in Ireland, water was, indeed, free until a few years back. Simply because there was no meter to track the use of water! Nat Geo estimated that the average Irish person used two or three times the average per capita amount used in the EU. And leaked 41% of the water they pumped before it reached anyone!

Whilst a country like Ireland grappled with pricing their water supply and measuring water use, Singapore recently announced a 30% water price hike in our 2017 Budget. It was a revision to recognise the “true scarcity value” of water as a resource. Unlike Ireland, Singapore does not have the luxury of large freshwater bodies to indulge in the illusion of a ‘bountiful’ water resource. Thankfully so, because water may be ‘bountiful’. But not freshwater. UN Water recognises water as a “scarcity resource” and has implemented standards to maintain and improve its quality.

Most of earth’s freshwater lies in glaciers and icecaps (69%)  and groundwater (30%). Singapore has neither. We have a cute little Singapore River which was smelly and polluted just 50 years ago. How do we get potable water at the turn of a tap?

Local Catchment Water – We currently have 17 reservoirs and two thirds of our land are water catchment areas. The plan is to increase that area to 90% of our land surface area.

Ever wondered why we have so many drains and canals in Singapore? It is helping us collect rainwater for use!

The Marina Barrage is currently our largest water catchment area and can contribute up to 10% of our water needs. And our oldest catchment area – Macritchie Reservoir, is 140 years old and still contributing to our water supply!

Imported Water – Most Singaporeans know we buy water from Johor, Malaysia. We even treat and sell it back to them. But the exact details…?

Geographical proximity is definitely not the only reason why we have to keep our divorced neighbour close!

NEWater – Our national pride – First in the world to consume our own excretion. But do you know that our treated excrement passed more than 130,000 tests and way surpassed the WHO standards? In terms of colour, level of organic substance, and suspended particles, NEWater was way lower than WHO’s threshold.

NEWater is currently able to provide up to 30% of our water needs.

Desalinated Water – Singapura – sunny island, set in the sea. We currently have 2 desalination plants, one of the largest in reverse-osmosis desalination plants in this region. 2 more plants will be completed by 2020. They treat and purify seawater for everyday use. As much as seawater is limitless, capacities of these plants are not.

The 2 plants currently provide up to 25% of our water needs.

Exactly how much water does Singapore need on a daily basis?

How do our national taps provide for that need?

We currently consume 430 million gallons of water a day; 151 litres per person daily. That is about 55 cubic metres a year, well below the annual water consumption per capita in most developed countries. *Round of applause*. (Although I suspect the figures below might have included industrial or agricultural use.)

And we have been driving down our consumption rate over the years.

We know that there are still parts of the world that do not have access to water and sanitation facilities. But do we appreciate Singapore’s efforts enough? Even amongst developed countries, Singapore has been recognised as a “global hydrohub” with about 180 water companies and advanced technologies in recycling water. Some of our national heroes include Hyflux and Sembcorp.

Each year, we celebrate Singapore World Water Day. This year, it will be at our largest water catchment area – the Marina Barrage, on 4 March. It will be a day of fun and activities. 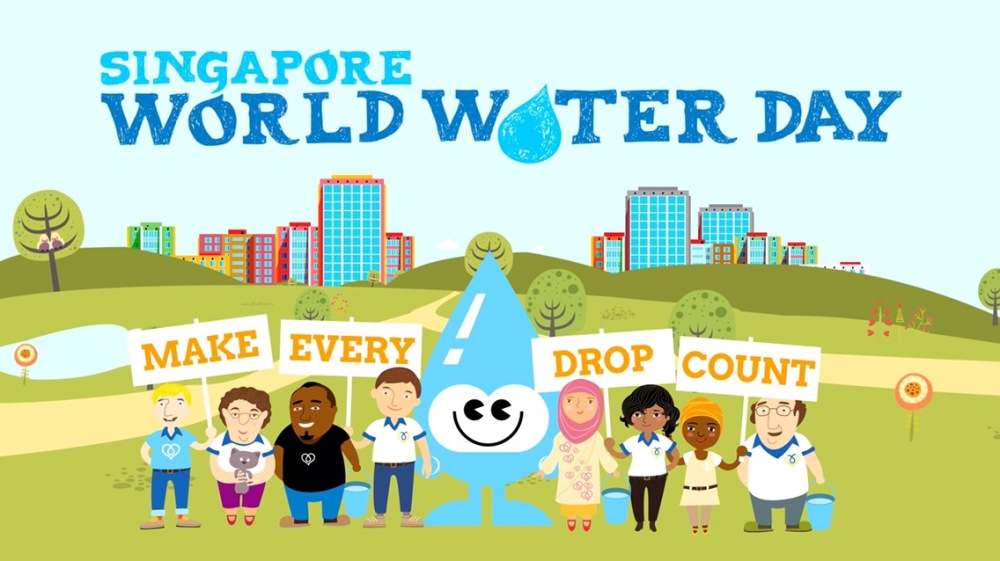 Prominent on international  delegates’ calendar is the Singapore International Water Week (SIWW) which takes place every two years. It showcases cutting edge technology to countries and companies and augments Singapore’s efforts and achievements as a forerunner in managing our water resource.
We should definitely be proud of our nation’s achievements in the global landscape and continue to ensure that it continues to flow for generations to come.